We know how important it is to stand as close to the service line as possible when returning a doubles serve, as it can give you an effective and aggressive start to the rally, however this can make returning the flick serve very difficult.

To perform a good return from a flick serve, it is important to consider 4 areas:

If these 4 areas are executed well, you will be able to have an effective return of the flick, as well as still being able to be aggressive on the low serve.

There are a lot of small variations between players at all levels on their exact starting position for a return of serve, but there are three components within this that we recommend.

Firstly, you should position yourself with your feet relatively wide apart with bent legs. Being ready and evenly balanced in this position will allow you to be ready to launch yourself either forwards or backwards to be early on your return of serve. You want to stand with your non-racket leg in front and this will take most of your weight. 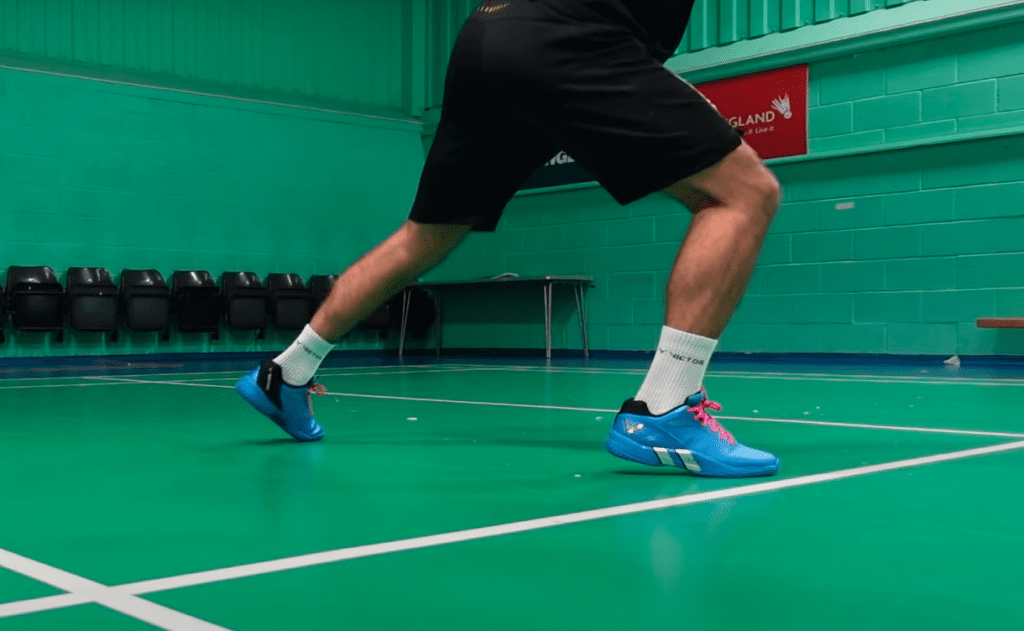 When in this ready position, it is important to consider the angle of your feet, specifically your front foot. You want to position your foot at a slight angle to enable the best possible push off from this position. 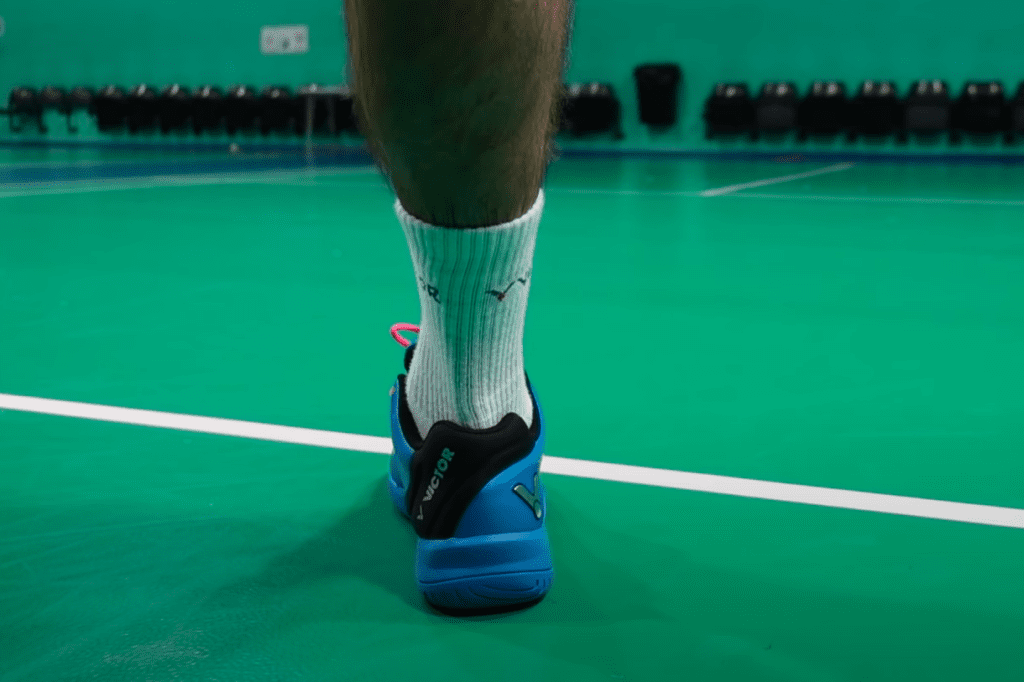 If you have your foot completely straight, or with too much angle to the side, it will decrease the amount of power you can generate when pushing off, therefore taking you more time to reach the shuttle.

Finally, you will need to consider how far up the court you position yourself. Of course you want to be as close to the service line as possible for the low serve, however there are a few other variables that may alter where you stand when considering the flick serve as well.

This choice is very dependant on your movement after this position (Section 3)! It is good to experiment with your starting position – try and challenge yourself to see how high up the court you can stand, whilst still managing to achieve an effective return of both the low and flick serve!

Your grip and racket position are key when returning a low, flick or even a drive serve!

You should hold your racket with a neutral bevel grip, allowing you to easily switch to a backhand or forehand depending on where your opponent serves to.

With this grip, you ideally want to hold your racket a little out in front of you, making sure there is a good amount of bend in your arm. This will help you meet the shuttle early for a low serve, not be too tucked in when moving back for the flick, and also to intercept those tricky drive serves that are becoming increasingly more common! 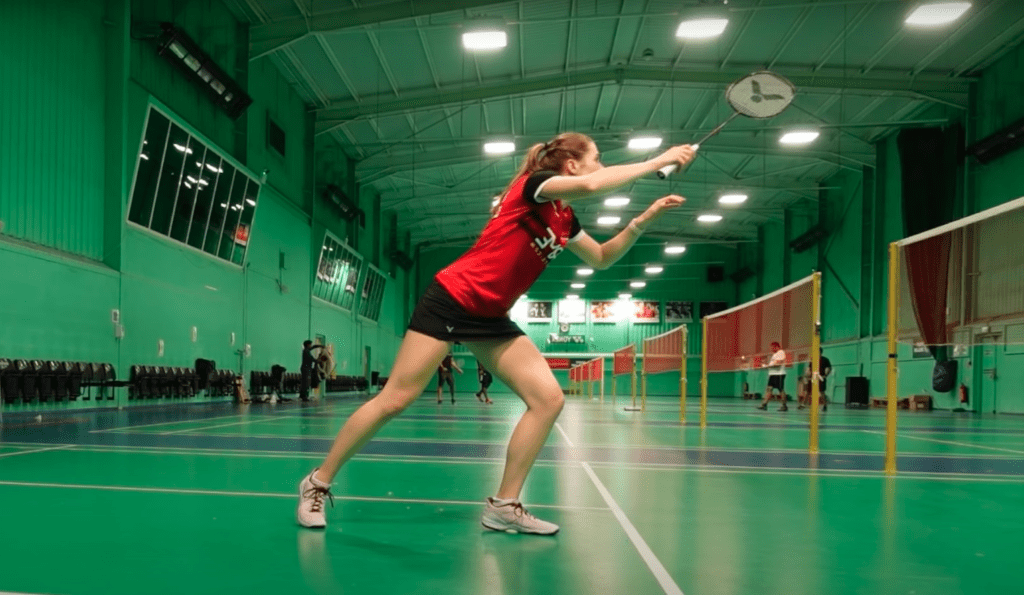 There is no one-way to move back to a flick serve, as it will vary due to factors such as the height, width and deception of the serve. However, we recommend 2 methods to move back:

At this point, you will start your swing. Ideally, you want to have your back leg roughly in line with the shuttle, and this leg will then push off the floor, initiating a scissor kick.

Sometimes, you may be caught off guard by a flick and be forced to lean, which isn’t preferable, but you can’t rely on perfect movement all the time! 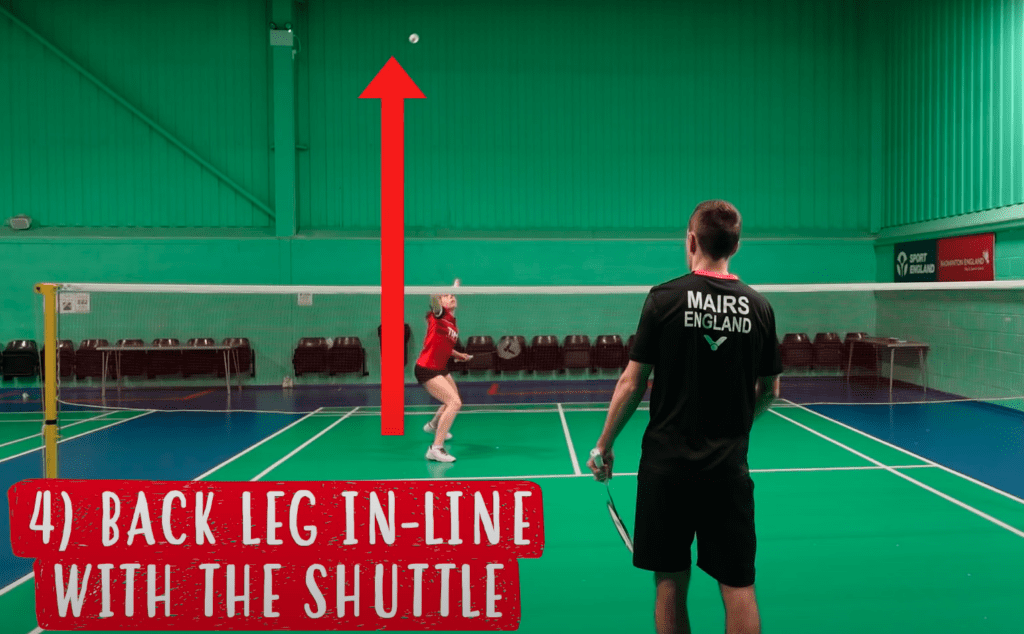 This movement is used more from a flat flick serve, where you don’t have time to chassee backwards. Similarly to the chassee movement, this begins by driving off your front leg, and lifting up your back leg for the initial position change, but then as your back leg reconnects with the floor, use both of your legs to jump backwards. You can then land either on your racket leg, or choose to kick-though to land on your non-racket leg.

As we mentioned, your movement will vary depending on the type of flick serve that you are receiving. So, if you are flicked to your round-the-head side, you will always want to use a scissor kick movement, whereas if the flick goes to your forehand side, you can jump out to a flat flick, or use the scissor kick again for a high flick (when you have a bit more time)!

There are a variety of different shots that you can play when returning a flick serve. It is always good to play an attacking (downwards) shot, however may not be a good option if you are off balance! Playing a smash off balance can put you under a lot of pressure, as your shot may be flatter, allowing your opponents to be able to step in to it and counter your shot, easily whipping you around the court. So don’t feel like you can’t clear, especially if you have good defence!

If you are in a good position, there are several options, including a smash, slice or drop, and these can be played straight, cross-court or to the middle of the court. This is where you need to think tactically about your return of serve, based on your strengths and your opponent’s weaknesses and / or their positioning on court.

Finally, it is important to remember to look for habits or patterns with your opponent’s serves. For example, if they rarely flick throughout the game, you can edge up the court slightly to try and be earlier and more aggressive on their low serve. Similarly, if they are mainly flicking, you can try taking a step backwards so you are earlier on to the flick serve!

Our YouTube video on ‘How To Return The Flick Serve’:

We hope you have found this post useful, for more information on how to return the low serve, check out this blog post here. 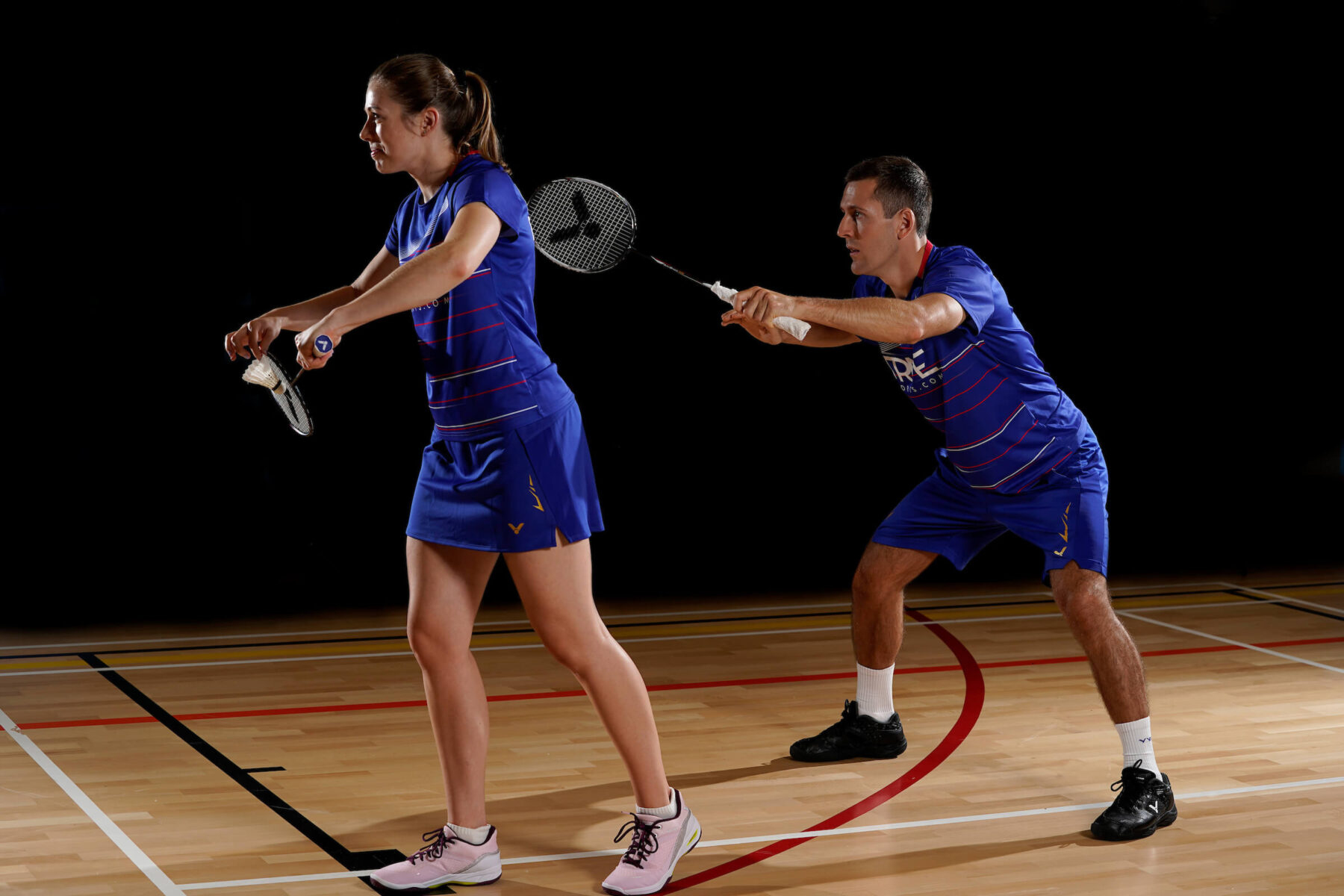